Climate Jobs Illinois coalition will advocate for a pro-worker, pro-climate agenda. The coalition will push for a thoughtful but ambitious clean energy transition through practical policies that create union jobs on large scale clean energy projects to lower the state’s high unemployment rate, reduce its emissions and close the growing income inequality gap in disadvantaged communities.

The coalition represents hundreds of thousands of Illinois working men and women who are best suited to build Illinois’ new clean-energy economy from the ground up. By advocating for bold clean energy investments with comprehensive labor standards, including prevailing wage, apprenticeship requirements, labor peace agreements, project labor agreements, and responsible bidder requirements, Climate Jobs Illinois is working to ensure these jobs create more pathways to the middle class, especially for communities disproportionately impacted by the COVID-19 pandemic and climate change.

Since the pandemic began, Illinois has lost around 600,000 jobs. Nearly half of those will likely never come back. The pandemic has also highlighted the effects of growing income inequality in Illinois and across the country, with disproportionate numbers of black and brown communities suffering job losses and significantly higher rates of COVID-19 infection and death.

Climate Jobs Illinois’ members recognize that introducing an ambitious but practical plan to invest in clean-energy infrastructure can drastically address the climate crisis while also closing the income inequality gap. In the coming weeks, the coalition will roll out a series of proposals focused on maximizing emissions reductions that create or sustain union jobs and apprentice programs in areas hit hard by the current economic crisis as well as by historic underfunding and discriminatory policies. 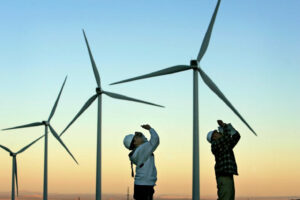 “Every parent’s dream is to provide a better future for their children. Building wind farms has provided my family a roof over our heads, food on the table and a cleaner tomorrow. With Climate Jobs Illinois leading the charge, our state will create more jobs like mine so everyone’s child can have a better future,” said Bob Howard, a wind construction laborer, member of LIUNA Local 362, and resident of Normal, Ill.

“The demand for solar power has been through the roof in Illinois. But without the state acting, my good-paying job and the progress we’ve made to cut emissions will end as quickly as a flip of a switch. Climate Jobs Illinois is going to make sure that doesn’t happen,” said Christine Blair, operating engineer-solar projects, member of IUOE Local 150, and resident of DeKalb, Ill.

“The Model T helped create the middle class by providing workers with a pathway to good wages and benefits in a union. I’m a former UAW member that worked at Mitsubishi in Normal, Illinois. I look forward to building the next generation of automobiles in the electric vehicle industry,” said Bob Thompson, a Rivian Press Operator, and resident of East Peoria, Ill.